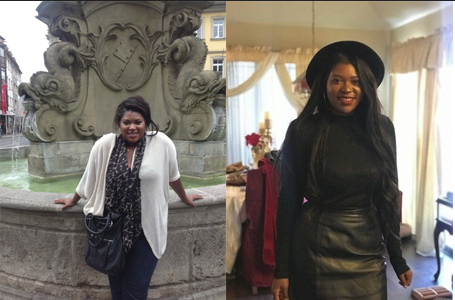 Ken’Drea’s journey with Atkins started in February of 2017. After years of dollar menus at fast food restaurants and late-night burgers during college, the pounds piled on. She entered the workforce, still in denial about her weight, until her company started a corporate wellness program, where each employee received a digital scale, and a co-worker bet her $100 she could lose more weight than Ken’Drea could. “I’m a very competitive person,” she says. “The day I received my scale on February 5, 2017, it was the first time I weighed myself since 2005. I was shocked to find out I weighed 240 pounds.”

Seeing this number on the scale was a wake-up call. “After finally seeing and accepting I was overweight, I knew I had to make a change,” she says. “Too many people my age are starting to have health problems because we are unhealthy at a younger age, and I didn’t want to be a statistic.”

At first she was so overwhelmed, she didn’t know where to start, but after researching different diets, she decided to follow Atkins 20. “The Atkins website is very simple and specific in what I needed to eat, but it still gave me flexibility to be able to experiment with food and still feel full,” she says.

And for the first time, she learned to meal prep and cook instead of eating out. A normal day of eating might include bacon and eggs for breakfast, low carb crockpot soup for lunch and zucchini lasagna for dinner. “For my snacks, I couldn’t have chips any more, so I learned to use celery dipped with guacamole, almonds or lettuce wraps,” she says.

Atkins’ low carb recipes made sticking with the plan even easier. “After two weeks, I was already down 10 pounds, and by the end of the month I was down 20!” she says.

Encouraged by these results, she added regular workouts to the mix. She had never exercised before, but started by walking during her breaks at work, and then slowly integrating weights and running.

Ken’Drea credits her friends, family and co-workers for their support during her low carb journey. “It’s so helpful to have a support system of people to encourage you when you’re not feeling the best, motivate you when you feel like giving up and uplift you even when you lost just 5 pounds,” she says.

Atkins’ Instagram page, which features low carb recipes and success stories, is also a big source of motivation for Ken’Drea, as well as other Instagram workout pages and the Tasty app for it’s “how-to-make” recipe videos.

It took Ken’Drea about a year to lose 92 pounds. At times her weight fluctuates (her lowest weight was 149 pounds, and she’d like to get back to that weight) but she realizes this is also part of life. “I want to encourage people not to give up,” she says. “If you have a cheat day once in a while, it’s OK. If you gain a little, it’s OK. You can always restart. It’s a journey. I truly feel like if I can do it, then anyone can change their lifestyle as well.”

Sweets:  “Usually when I want something sweet, I’ll have a few spoonfuls of frozen Cool Whip", she says, “It tastes just like ice cream, but it is very low in carbs.”

Fried food: “I love fried chicken tenders, but if you use coconut flour instead of regular flour, they are low in carbs and still taste amazing.”

Snacks: “If I need something quick and filling, I can usually grab one of the Atkins bars, and I am full until my next meal,” she says. “They are a lifesaver!”

Best low carb kitchen gadget: Although you can buy spiralized zucchini noodles, Ken’Drea likes her spiralizer, as she can also use it for low carb fries and ravioli.

Warm up your weeknights with these low carb sheet pan recipes. The wonderful thing about a sheet pan meal is that it saves time, and clean-up is easy since you’re only using one pan. The low sides of a sheet pan encourage air flow that makes it easy to brown and roast entire meals. Here

If you’ve been thinking about cutting back on carbs, now is the time to try Atkins 100. It can be a delicious and livable “reset” to the way you may currently eat. While the average American consumes around 240 grams of carbs a day, Atkins 100 reduces your carb intake to 100 grams of Net