6.2g
Net Carbs
Prep Time: 30 Minutes
Style:Italian
Cook Time: 20 Minutes
Phase: Phase 1
Difficulty:
* Any adjustments made to the serving values will only update the ingredients of that recipe and not change the directions.
11.5g

Use the Atkins recipe of choice to make pizza dough for the crust and Basic Tomato Sauce; you will need 1 cup sauce.  In this recipe we have used the Almond and Parmesan Pizza Crust recipe but you could also use the Almond Thin and Crispy Pizza Crust if you are in Phase 3 or higher,  Flax Meal Pizza Crust or the Soy Flour Pizza Crust.  Most of these come in at around the same NC so they can be interchanged.  Note that all but the thin and cripsy crust are acceptable for Phase 1 (but be wary if you are in Induction as all but the flax meal crust contain nuts which are best avoided during that period). 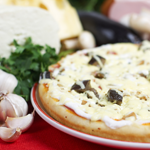