DENVER- October 23, 2012 – A recent study funded by the National Institute on Aging from the Mayo Clinic and published in the Journal of Alzheimer’s Disease has found that people 70 and older who eat food high in carbohydrates have nearly four times the risk of developing mild cognitive impairment, and the danger also rises with a diet heavy in sugar. The study found that people who consume more protein and fat relative to carbohydrates are less likely to become cognitively impaired.

“This is consistent with what we’ve seen in past published research on how a lower carbohydrate diet can help reduce the risk of Alzheimer’s,” said Colette Heimowitz, vice president of education and nutrition at Atkins Nutritionals, Inc. “This is further evidence that a lower-carbohydrate, lower sugar diet with higher proteins and higher fats is a healthy eating approach and will help reduce the risk for cognitive impairment.”

The researchers tracked 1,230 people ages 70 to 89 who provided information on what they ate during the previous year. Their cognitive function was evaluated by an expert panel of physicians, nurses and neuropsychologists. Of participants, 940 had no signs of cognitive impairment and were asked to return for follow-up evaluations of their cognitive function. Four years into the study, 200 of the 940 were beginning to show mild cognitive impairment, problems with memory, language, thinking and judgment that are greater than normal age-related changes.

Backed by more than 80 published, scientific studies, Atkins is a long-term, well-balanced diet plan that encourages the consumption of protein, good carbs and a balance of fats. The plan recommends more vegetables than is recommended by the USDA. Additionally, Atkins reduces added sugar and excessive carbohydrate intake, particularly of foods that have been shown to provide little nutritional value.

About Atkins Nutritionals, Inc.
Atkins Nutritionals, Inc. is a leader in the $2.4 billion weight control nutrition category, and offers a powerful lifetime approach to weight loss and management. The Atkins Diet focuses on a healthy diet with reduced levels of refined carbohydrates and added sugars and encourages the consumption of protein, fiber, fruits, vegetables and good fats. Backed by research and consumer success stories, this approach allows the body to burn more fat and work more efficiently while helping individuals feel less hungry, more satisfied and more energetic.

Atkins Nutritionals, Inc., manufactures and sells a variety of nutrition bars and shakes designed around the nutritional principles of the Atkins Diet™. Atkins’ four product lines: Advantage®, Day Break™, Endulge™ and Cuisine™ appeal to a broad audience of both men and women who want to achieve their weight management goals and enjoy a healthier lifestyle. Atkins products are available online at atkins.com and in more than 30,000 locations throughout the U.S. and internationally. For more information, visit atkins.com. 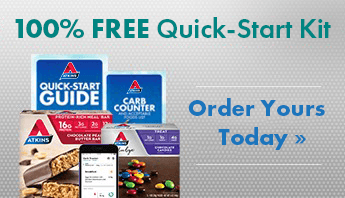