DENVER, CO. (August 4, 2010) – Atkins™ Nutritionals, Inc. (“Atkins”) applauds the study conducted by Temple University’s Center for Obesity Research and Education, which was funded by the National Institutes of Health and published in the August 3, 2010, issue of Annals of Internal Medicine. The study concludes that a low-carbohydrate diet is associated with favorable changes in weight loss and cardiovascular disease risk factors. The Temple University researchers used the 2002 version of the Atkins Diet™ described in “Dr. Atkins’ New Diet Revolution” as the model for the low-carbohydrate diet used in the study.

“We are very excited about this study, which is the latest of many that demonstrate the positive effects of the Atkins Diet,” said Monty Sharma, CEO of Atkins Nutritionals. “I’m confident that the results would have been even more profound had the study participants followed the latest version of the Atkins Diet introduced in “The New Atkins for a New You.’”

“The New Atkins for a New You” was published in March 2010 (Fireside) and authored by Dr. Eric C. Westman (Duke University), Dr. Stephen D. Phinney (University of California at Davis) and Dr. Jeff S. Volek (University of Connecticut). The book spent 18 weeks on The New York Times Best Sellers List (paperback/advice) after its debut.

The two-year, federally funded Temple University study focused on 307 adults, of whom two-thirds were women. Half of the participants followed the Induction phase of the Atkins Diet for three months before increasing their carbohydrate intake by five grams a week until they reached a stable weight. The other participants followed a low-fat diet, consisting of 1,200–1,800 daily calories of which less than 30 percent was fat.

Results showed that while both the low-fat and low-carb diets promote successful weight loss, the Atkins Diet increased the body’s levels of HDL (“good”) cholesterol by 23 percent—nearly twice as much as a low-fat diet, which increased HDL levels by only 12 percent. Many other studies of up to one year’s duration have reported similar beneficial results, but this is the second two-year study.

“The New Atkins for a New You” provides a detailed roadmap for moving through the four phases of the diet, enabling followers to find their individual tolerance for carbohydrates, a concept that was introduced in this book for the first time and was not available to Temple University at the time of the study.

“Had participants in the Temple University study known how to find their own carbohydrate threshold—instead of continuing to add carbohydrates until weight loss ceased—they would have almost certainly lost more weight and shown even higher HDL cholesterol levels,” said Dr. Eric C. Westman, a coauthor of “The New Atkins for a New You.”

“The New Atkins for a New You” details how science has transformed the Atkins Diet into an established, medically validated, safe and effective treatment. The book also promotes the consumption of a wide variety of whole foods, including multiple protein sources, as well as vegetables, low glycemic fruits and—as one approaches one’s goal weight—whole grains. The adequate levels of protein, fat and fiber in these foods keeps dieters satiated longer, but eliminates the simple sugars and quickly digested carbohydrates that spike blood sugar, and therefore hunger and cravings.

Atkins Nutritionals, Inc., manufactures and sells a variety of nutrition bars, foods and shakes designed around the nutritional principles of the Atkins Diet™. Atkins’ four product lines: Advantage®, Day Break™, Endulge™ and Cuisine™ appeal to a broad audience of both men and women who want to achieve their weight management goals and enjoy a healthier lifestyle. Atkins products are available in more than 30,000 locations throughout the U.S. and internationally. For more information, visit atkins.com. 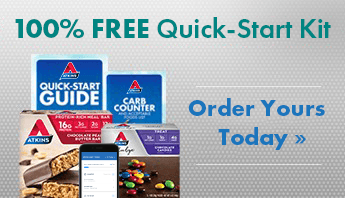