1.4g
Net Carbs
Prep Time: 10 Minutes
Style:Mexican
Cook Time: 10 Minutes
Phase: Phase 1
Difficulty: Difficult
* Any adjustments made to the serving values will only update the ingredients of that recipe and not change the directions.
3.5g

This recipe is suitable for all phases except for the first two weeks of Induction due to the almonds. 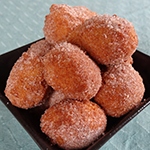